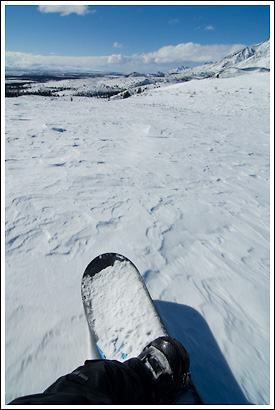 I’ve been practicing this one a bit. Trying to get a snowboarder’s eye view of snowboarding. It’s pretty hard. Well, I’ll be honest – for me, it’s really hard. Really, REALLY hard. I fell over more times than I want to admit. Certainly more times than I wanted to fall over. And the slope is a good bit steeper than the image appears, so I was moving pretty fast.

What’s hard is lifting the camera to the eye without making a turn.

On a snowboard, like a skateboard or surfboard, one turns the board by turning the head and torso.

Every time I’d lift the camera up, I’d unconsciously turn my torso a bit, and the board would go with it, doing a ‘heelside turn’ effectively. Then I’d realize I was turning too far left, turn back the other way, doing a ‘toe-side turn’, over-correct, catch an edge and bust my ass.

Trying to hold my camera so it wouldn’t hit the ground as I wiped out was a bit of a mission, but I’ve so far managed to do it OK.

I practiced a bit on some gentler slopes, but there’s no substitute for the real deal. I’m rippin’ along here at probably close to 75 miles an hour or so. 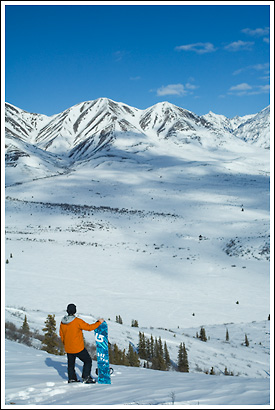 Do I look just wicked bad in my orange jacket, or what? You need sartorial advice, you ask me, OK? 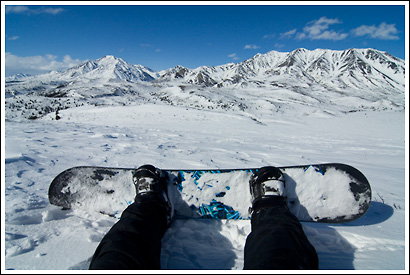 Don’t look down. Snowboard champion, Carl Donohue, self-portrait. Or maybe that should be ‘Snow Bored Champion’?

Either way, I set about trying to get some photos of myself riding my snowboard. You can see how steep this run was.

One way to tell how good a snowboarder someone is in photos is how much snow is on their pants .. from this clean pair of Marmot Liquid Steel Gore-Tex XCR pants, you get an impression of someone who doesn’t fall down much.

Well, you might get that impression .. then again, you weren’t out there watching me, were ya? 🙂