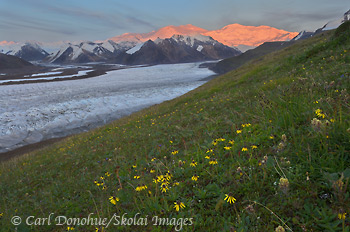 Russell Glacier and Mount Bona and Mount Churchill, alpenglow at sunset, and an array of wildflowers in Wrangell-St. Elias National Park and Preserve, Alaska. Please click on the image above to view a larger version of this photo.

Here’s an oldie but a goodie; well, not really an ‘oldie’ in the sense of a photo I took a long time ago, but a recent version of a favorite scene of mine; Mt. Bona, Mt. Churchill, the University Peaks and the Russell Glacier, Wrangell-St. Elias National Park and Preserve. I shot a very similar composition to this a few years ago on a Skolai Pass Photo Tour in the fall.

We very nearly didn’t get this scene last week. After a long backpack (made even longer by twice running a grizzly sow with her 3 cubs) we made camp and had a well – deserved supper. Tired, I watched as the light started to get better in the late evening, and thought it might be worth a hike a little further over toward this scene. In part because I wanted to shoot the alpenglow, but also because I wasn’t sure if the weather would hold until the next day, and I so wanted the 2 people on the trip to get to see this view while it was clear; I convinced one of the folks to join me for a walk, and we headed off toward the glacier.

When we arrived, the sun was still well up, and the light not nearly so warm. We made some photos, scouted out possible compositions, and waited around for the evening light; instead, the light faded; distant clouds behind us blocked the fading sun from the mountains, and the light dimmed. I thought it might be worth heading back toward camp in the hope of maybe catching some colorful clouds at sunset. We walked about 10 minutes in that direction and starting shooting some images in that area. I turned and saw the light in this direction start to glow again, and knew it would be a good idea to head back.

I had to hustle back got back just in time to catch the last of the alpenglow. Having already been here earlier, I knew exactly the foreground I wanted, which lens and composition I wanted, and this shot was merely a matter of pointing and shooting.

I guess in some ways this scene isn’t anything new, as I’ve shot almost from this very spot before; but it’s not a bad place to spend a nice afternoon, and even make some photos all the same. 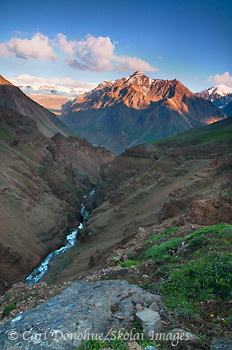 Sunset over the Chitistone Valley and University Peaks. Mount Bona stands in the background. Please click on the thumbnail to view a larger version of the photo.

One gorgeous evening, a 2 mile hike (one-way) from camp and some more photos that I had been hoping for some time now to make. Lucky me!

We just trekked from Skolai Pass, in Wrangell St. Elias National Park and Preserve, to ‘Wolverine‘, a landing strip high above the Chitistone Valley, over the relatively popular ‘Goat Trail‘. This is a classic hike, and one I try to make every summer. Before I talk about it further, I’ll qualify what I mean by ‘popular’ here.

Probably not 50 people hike this route each year, more likely 40, at most. Consider, for example, that nearly TWO THOUSAND people venture to hike the entire Appalachian Trail each year, and one starts to see that the word ‘popular‘ is entirely contextual. I only say ‘popular‘ here because so few people hike anywhere else in Wrangell-St. Elias National Park.

We had a real mix of weather on this trip, so I was SUPER lucky to grab such a gorgeous evening here at this location. the clouds dissipated throughout the course of the day, which we spent backpacking across the Goat Trail, a steep sloping scree-sided series of ravines, traversed by a meandering myriad sheep and goat trails; hitting the correct ones makes a huge difference on how easy the traverse is. The ‘wrong’ ones can easily be impassable for people, especially those carrying heavy backpacks. END_OF_DOCUMENT_TOKEN_TO_BE_REPLACED 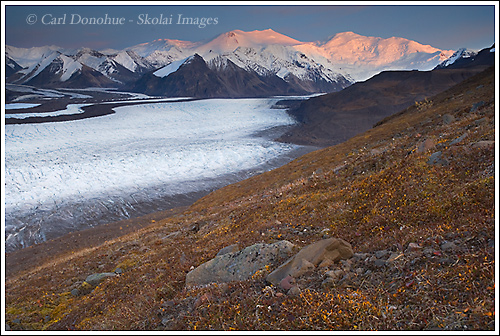 I just got back from a totally awesome trip to Skolai Pass – some great weather, wonderful folks for company, and we all had a killer time in the coolest place in the world – Skolai Pass! This image was taken the first evening, after we backpacked up to Chitistone Pass, walked south to the Russell Glacier, and watched the alpenglow rock Mt Bona (on the right) and Mt Churchill (center).

The rest of the trip I hiked around the area and had a blast. I didn’t hardly shoot anything, of course, because my *#^$$*#^# camera ceased working the following morning. One of the people on the trip was kind enough to let me use his backup camera, which was WAY cool. Thanks Doug!

Always have a backup camera body with you.