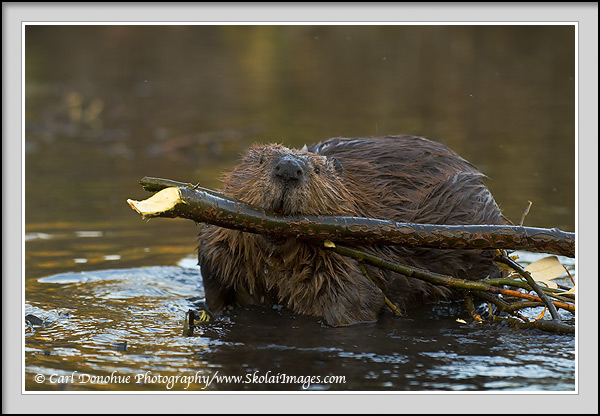 Beaver, (Castor canadensis), hauling willow back to his lodge for the winter, Wrangell-St. Elias National Park and Preserve, Alaska.

It’s true, so I jumped right in. In the last few months I’ve opened the pages of Facebook and Tweeted my first Tweet, and just this week started a Flickr photo account. Additionally, my guiding business, Expeditions Alaska, is now Linked In. Social networking, I’ve been instructed, is the key to my future success and now, after wrapping up a summer of hiking and backpacking in the mountains, I’m giving it a shot.

It’s an interesting and somewhat challenging process. You don’t need me to write about the ways in which successful folks engage this ‘social networking’, as this has been covered elsewhere far more effectively than I might manage. The topic here is the pervasive, engulfing nature of such sites as Twitter and Facebook, etc. According to their stats page Facebook has more than 300 million active users (irony of the term ‘users’ duly noted). END_OF_DOCUMENT_TOKEN_TO_BE_REPLACED