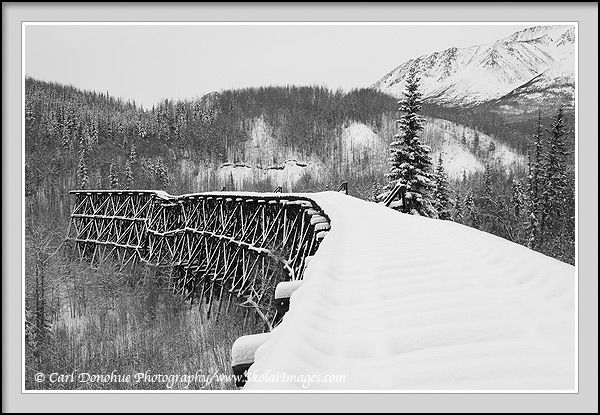 The Gilahina Trestle, crossing the Gilahina River, was once an impressive structure. Built in 1911 as part of the Copper River and Northwestern Railway (nicknamed “Can’t Run and Never Will”), the Gilahina Trestle was not quite 900′ long, and nearly 100′ high. Rumors say that it took less than 8 days to build, and the first train ran across its length on January 28, 1911. It’s since fallen into some disrepair, as is evident from this image. It’s a rickety ole job, at this point, and walking across it with nearly a foot of snow covering each board was, uhhm, sketchy. But I made it out for a few photos and back in one piece.

The Gilahina Trestle is now listed on the National Historic Register, which means it’ll probably come in for some funding to repair/restore it. END_OF_DOCUMENT_TOKEN_TO_BE_REPLACED