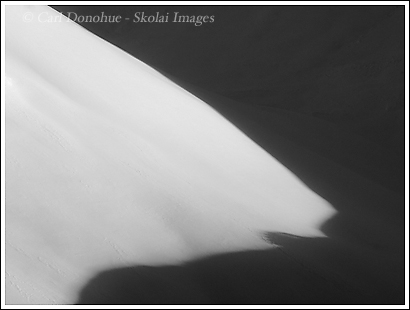 Here’s another photo of some snow patterns on the mountain side. I liked the yin yang thing going on here. Converting to black and white gave me a little more flexibility with playing with the tone, etc, and accentuated the pattern.

Who said there are no polar bears in Wrangell-St. Elias National Park? 🙂 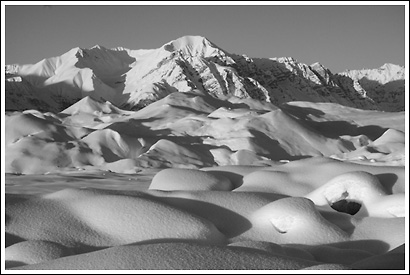 Sorry it’s been a while. Not much to tell, I suppose. I have been shooting a bit, but the weather’s been lousy, so don’t have much. I’ll try to get some images downloaded to the computer so I can post something soon.

This one is from late last year. Looking across the Kennicott Glacier towards some unnamed mountains.

Still haven’t found me a wolverine, but I sure been looking. 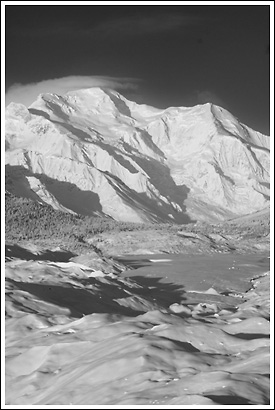 I hope you’re not tiring of Mount Blackburn. It’s an awesome mountain. One of the primary reasons I wanted to spend some time here in the winter is to catch this mountain in good light. In the summer time, when travel here is a bit easier and the weather much warmer, the good light is on the north side of the mountain. So here I am, running around at 50 deg below F trying to make a decent image of the mountain. I went up new year’s eve to shoot, and the light was amazing.

Of course, both my camera batteries died, due to the cold, and I made 3 photos, then spent my time sitting in the cold watching the alpenglow light up the mountain as if it had a fire inside. It was something special to witness, but I’ve not a single image of the event. Since then it’s been cloudy.

The weather did warm up to a comfortable 20 below though, so there’s always something positive. That and the little rubber foot off my tripod that fell off, and I thought was long gone, lost; I was wandering back to the shack just at dusk, when  I saw this little black thing half buried in the snow .. I kicked it (as I’m prone to do such things), and it was my rubber foot off my tripod. Woo hoo!

You all stay warm. I’ll try to get some images of something other than Mount Blackburn here sometime soon. 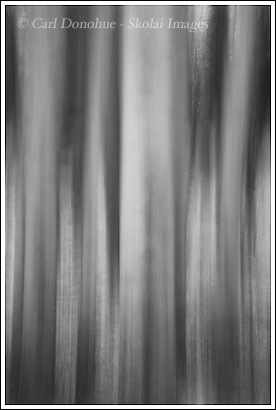 Here’s an image from my most recent venture into the park. I’ve never really tried this kind of technique with photography too much, but I kind of enjoyed the results. Some of them, anyway. It was interesting to me to edit this series of photos – abstract images emote so differently, and I’ve not a lot of practice in that field, so I felt I wasn’t really sure what I was supposed to be looking for.

The technical aspect of photos is so dominant in more orthodox imagery, so editing become somewhat rote; check sharpness, exposure, etc. But abstract imagery requires a different process, and I find it hard to edit END_OF_DOCUMENT_TOKEN_TO_BE_REPLACED