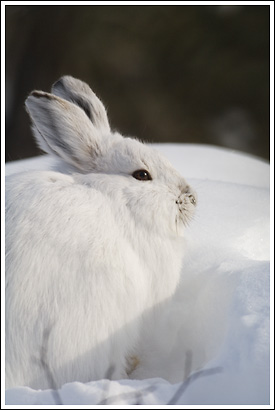 Here’s a REAL snowshoe hare photo, taken on my recent sojourn to the northern side of Wrangell-St. Elias National Park. I was very surprised at how little sign of snowshoe hares there was in this area – negligible. Everywhere else, it seems, the woods are crawling with them. This is at, or close to, the peak of the cycle for snowshoe hares; a 10 year population fluctuation that seems to be pretty consistent.

Sometimes the cycle might be 9 years, or 11, but it’s not usually far off. The population rises steadily, then faster, peaks, and falls drastically,  almost completely, in a single year. Ecologists aren’t sure as to what causes the drop in numbers, though theories abound, as always.

One theory is simply over-population causes starvation, though there is evidence from a few studies that even with ample food sources, the hare populations still drop. Another is that the increase in hare numbers yields an equal increase in predator numbers, and the resulting high population of predators causes the hare numbers to drop.

However, perhaps the best known of snowshoe hare predators is the Canadian Lynx.

The relationship between snowshoe hares and lynx populations is well known, and graphed in almost any ecology text. The lynx population tends to follow, with a year or 2 lag, behind that of the hare.

Right now, lynx numbers are pretty high, meaning it’s a good time to try photograph them. (I got one last winter, and my friend Ron got one this last fall – his photo is better than mine, but I got mine first! 🙂 )

Speaking of which, I did see a lynx this last trip, but the day was over, it was almost dark, and I wasn’t able to photograph him. Ironically, the lynx was traveling along a trail that had been laid in by a trapper, and only a week earlier the area was loaded with  traps.

Anyway, no one’s quite sure what causes the snowshoe hare numbers to crash so dramatically.

One theory is that willows, their main food source, build up a toxin that the hares avoid, and after a number of years, the willows in the area get too toxic, and the hares won’t browse the willow, and so starve over the winter. This seems to be apparent in some places, but not in others.

What’s really cool, is that the willow toxins tend to be lower down on the plant, in the first foot or 2 above the snowline, and the higher parts of the willow, out of the snowshoe hare’s reach, aren’t toxic – they remain palatable to that other great willow browser, the moose.

Pretty cool. But again, there is evidence that this isn’t the reason, or certainly not the only reason, that the hare populations crash.

Another theory involving the predators is that they stress the hares enough to affect their ability to reproduce – the woods are really alive with with raptors, lynx, foxes, coyotes, etc, and they all chase the hares. But, nobody really seems to understand completely what goes on, which is perhaps as it should be.

One thing that makes it difficult to study is the length of the cycle; 10 years is a long time to study a single species, and in order to verify some recorded data, one has to wait 10 more years, which means few researchers know much about it, firsthand. One fellow in Canada, I believe, has studied them for 40 years, so he probably know more about them than anyone. I forget his name though.

The cycle seems to be pretty consistent all across the northern boreal forest, from eastern Canada to western Alaska.

After the hare population crashes, the lynx population tends to follow, within a year or 2. Then it takes about 3 years or so for the hare numbers to start increasing again.

This could be because of toxic willows, or it could be due the physiological changes from stress; i.e., it takes a few generations to breed this stress factor back out of the population.

Such is the way of the snowshoe hare and the lynx.