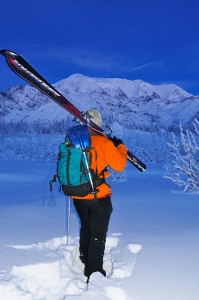 Winter is a great time for backcountry skiing in Alaska. Cross country skiing and ski touring in Wrangell-St. Elias National Park and Preserve, along the Kuskulana River, near Mt Blackburn and the Wrangell Mountains, Alaska. Please click on the image above to view a larger version of this photo.

Happy New Year, and Welcome back to the blog. I had a somewhat mixed couple of weeks, which I’m sure I’ll tell you all about here soon enough. Before I get all that together however, I’ll post a short note about this news I saw, an article concerning a new publishing of the Mark Twain classics: “The Adventures of Tom Sawyer” and “Adventures of Huckleberry Finn,” edited by Professor Alan Gribben of Auburn University at Montgomery. It differs from other editions of those books because Mr. Gribben has turned the word “nigger” — as used by Tom and Huck — into “slave.” Mr. Gribben has also changed “Injun” to Indian.

This is interesting to me. I’m a huge fan of Twain, particularly those novels, and the idea of editing (i.e., rewording) such great work is almost ghastly .. on the surface. On the other hand, we live in a world where art, including ‘great art‘ is constantly being ‘adapted‘ for presentation: consider films presented on television, for example. How are bleeps, voice-overs, cuts and blurred body parts any different to a publisher swapping out words that might be offensive or inappropriate? Or updated versions of Shakespearean classics, making them infinitely more readable for kids? How about song lyrics bleeped for radio play? Or, better yet, literary classics like Nabokov’s “Lolita” banned from schools altogether?

How about the outcry over John Denver’s “Rocky Mountain High”? The US Senate held a hearing in 1985 to deal with explicit lyrics in pop music. So we’re not talking about anything new here at all. Indeed, one of the most popular shows on TV in recent times is American Idol, where countless classic tunes have been butchered by this generations’ most current attempts to throw its own heros up the pop charts. 🙂


The examples are myriad. And then we’re still talking about final versions of the artworks being edited. This doesn’t include edits and changes made before release. Next time you rent your netflix video, check out the editor’s cut and compare it to that version released in the movies. For a great look at the film industry, I’d recommend watching ‘This Film Is Not Yet Rated‘ .. interesting stuff.

It’s similarly important to remember, I think, that this is simply one publisher’s “rendition” of the book. The book is still widely available (thankfully) in all it’s original glory. I’m sure there’s a Cliff Notes version of the book available somewhere else; which is really more problematic, editing potentially offensive words from a classic, or editing 90% of the content?

On the whole, I don’t think it’s a good step at all to present work like Twain’s classic with such drastic alterations. At the same time, if we so readily embrace this kind of editing and censorship everywhere else, is it really such a bad thing when it deals with a book like Huck Finn? Some schools, for example, won’t teach this literature because of the content, and maybe getting American classics like this in front of schoolkids, even in a whitewashed form, might be worthwhile. What use is a “classic”, if it becomes, as Twain himself defined it “A book which people praise and don’t read”?

Censorship, it seems, is simply a bane of society. The right to self-expression is tempered by the responsibility to our neighbor; “Civilization is the limitless multiplication of unnecessary necessities.” ~ Mark Twain.