The first of the monthly series for 2011. In no particular order:

A Video by Frans Lanting. A short video presentation on his Life Project, and how the ‘biodiversity project’ for National Geographic led him there. Quite possibly the only photography related “news” you need to give your attention to. Amazing.

Animal Photos of the Year. The UK’s “The Telegraph” present 30 Photos of the year, in the category “Feeding and fighting”. The first image is fantastic. Check all the categories for some more cool photos.

ANWR turns 50 Years old. And I’ll plug my own slideshow here. If you haven’t seen it, take a wander through the Arctic National Wildlife Refuge with this birthday tribute; 50 years since the establishment of the Refuge. Here’s to the next 50.

Photographers present their 2011 favorites. Jim Goldstein hosts the annual photo-pallooza, with well over hundred and fifty photographers offering their favorite images from the last year. Thanks to Jim for putting this together. Check out the work here.

Photography Business Plan. A helpful article on mapping out where you might want to head, starting now. Contrast this structured approach to the typical “let’s see what happens when we press this” strategy adopted by most “artist” types (yes, yes, yes, I know, gimme a  break here, OK?) 🙂 Start Your photo business plan for 2011.

Frog and a Snake. Of all the amazing images coming from the countless weather related madness around the world, this one is pretty wild. A frog hitches a ride on a the back of a brown snake to flee the flooding in Queensland, Australia.

Photo Editing Tips. Another article via Jim Goldstein’s blog, Experienced professional Gary Crabbe offers his advice on editing photos. A helpful read, well worth your time. Gary’s really someone to learn from, so this article is full of useful tips.

Aperture Blog. Aperture users would do well to subscribe to this great blog. With a new look, it’s a great site.

Meditation and the Brain. Not directly “photography” related, but I’m sure the findings would be very similar had they studied making art. “an 8-week meditation course leads to structural changes in the brain”. Short article from Scientific America.

We are Cyborgs now. Technology is evolving us, says Amber Case, as we become a screen-staring, button-clicking new version of homo sapiens. Amber Case studies the symbiotic interactions between humans and machines — and considers how our values and culture are being shaped by living lives increasingly mediated by high technology. Good, short presentation.

Google and Bing? Who’s copying who? Google says Bing is “cheating, copying our search results”. Perhaps what’s most disturbing is Bing’s response, in the article: “Bing has been watching what people search for on Google, the sites they select from Google’s results, then uses that information to improve Bing’s own search listings. Bing doesn’t deny this.”

Science and People. Are we hard-wired to distrust science? “The absence of scientific evidence doesn’t dissuade those who believe childhood vaccines are linked to autism, or those who believe their headaches, dizziness and other symptoms are caused by cellphones and smart meters. And the presence of large amounts of scientific evidence doesn’t convince those who reject the idea that human activities are disrupting the climate.” This is a pretty interesting article, read it here.

Facebook Ads are up. Facebook continue to spread the word, and make every single word you utter someone else’s spam. Now they’ve “introduced a new advertising vehicle called Sponsored Stories, which takes all those shared “likes,” check-ins and other actions that are already being posted by you and your friends and turns it into a paid ad.” The folks at Facebook say who tested this out said “it helped with brand identification and retention.” Seems like there’s no end to this stuff. Full article.

2010 Tops off a hot decade. And yet the deniers continue. “Topping off the warmest decade in history, 2010 experienced a global average temperature of 14.63 degrees Celsius (58.3 degrees F), tying 2005 as the hottest year in 131 years of recordkeeping.” From the Earth Policy Institute. 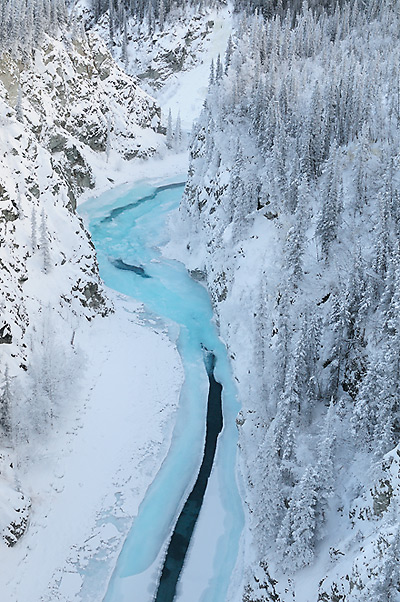 Winter on the Kuskulana River, Kuskulana Gorge, near the McCarthy Road, Wrangell-St. Elias National Park and Preserve, Alaska. During the summer this river rages a dirty silty brown, a seething torrent of dirty water. At the lower water levels of winter, it becomes a beautiful turquoise. Fantastic place.

Wilderness Debate. Is it jobs versus preservation, of jobs versus jobs? “For years, colleagues in the outdoor industry have recognized the tired, old sound-bite debate of “jobs vs. preservation” as overlooking the 6.5 million Americans whose jobs are created by the active outdoor recreation economy. It is as if the $730 billion contributed to the American economy annually did not exist”. A nice article by Black Diamond Equipment CEO Peter Metcalf.

Doug Peacock on Grizzlies. In an interview with Yale Environment 360, “Peacock talks about why the demise of white-bark pine will lead to more contacts between grizzlies and people, why the grizzly needs to be protected under the Endangered Species Act, and how witnessing the bear in the wild helped restore his spirit after his tour as a Green Beret medic in Vietnam”. Doug Peacock’s awesome. Check this interview out.

Durrell’s vontsira (Salanoia durrelli) Welcome to the world. Scientists “discover” the Newest Member of the Order Carnivora in 24 years. A mongoose-like creature in Madagascar. Of course “the creature may not be long for this world: much of its wetland habitat has been drained to grow rice”.

Conservation Biology. A great article focusing on climate change and conservation, looking closely at the National Parks and particularly Yellowstone. “As ecologists scramble to predict changes, park managers are gearing up for a new management style, which will have to include at least one of two approaches traditionally anathema to the profession: letting things change, or intervening aggressively to keep them the same. In many cases, choosing between these strategies will be the challenge.”

The World’s Newest Cat. Scientists have determined that the Clouded Leopard actually exists in 2 distinct forms, or species. “This big cat is so enigmatic that researchers only realised it was a new species – distinct from clouded leopards living elsewhere in Asia – in 2007. The first footage of the cat in the wild to made public was only released last year”. Pretty cool article here, with a video.

High school biology teachers and evolution. This is disturbing. “The central theory of biology is evolution, yet a new study shows that most high school biology teachers are reluctant to endorse it in class. .. about 60 percent, “fail to explain the nature of scientific inquiry, undermine the authority of established experts, and legitimize creationist arguments.” I wonder if math teachers resist teaching pythagorean theory?

Shark-eating Orcas. Wow! Fascinating read (and yes, I agree SA shouldn’t have called Orcas “Whales” – they’re dolphins) … “one type of killer whale, or orca, has been found to dine on an unusual dish: shark. But these ‘offshore’ killer whales of the northeastern Pacific pay a high price for their tough-skinned preference — their teeth become worn right down to the gums”. 2 of the 3 well-studied northeastern Pacific orca have been known since the 1970s: One, the ‘residents’ eat fish, and the others, the ‘transients’, eat marine mammals, like sea lions. The 3rd, known as ‘offshore orcas’ “were first identified in the late 1980s, but what they prefer to eat has been a mystery up to now.”

Quote #3: “The difference between pornography and erotica is lighting.” – Gloria Leonard

That’s the news from here til next month. If you have any items you’d like to add below, please do so. The only qualifiers are that you must have actually read the article/watched the video/browsed the photo/s, AND thought the link actually worthwhile sharing. Put everything else on Twitter. 🙂