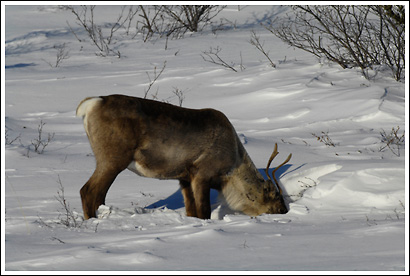 Normally I wouldn’t post a photo of an animal with its head buried under the snow. But, for caribou, this is winter life. Caribou feed on lichens and grasses, and those lie buried, often deep beneath snow’s crust for the long winter months.

Caribou have a few options to eke out their winter, and a heavy snow pack in the winter can be a tough gig for them; finding food is a mission and avoiding predators, namely, the wolf, an equally difficult, if not critical, task. So they’ll typically seek high ground, windblown ridges such as this one, where the snow packs is shallower, providing the caribou better footing for escape from the wolves, and also easier digging to find food. They have a reasonably keen sense of smell, and that’s how they find where to dig.

Also, the deeper the snow, the harder it is to smell food sources underneath.

The caribou bulls will use their 3rd antler, the ‘shovel’ to scrape away snow and get at the vital plantlife below, but the cows, though they do have antlers, don’t have this shovel antler, so they tend to dig out snow mostly with their hooves.  You can see the technique here: 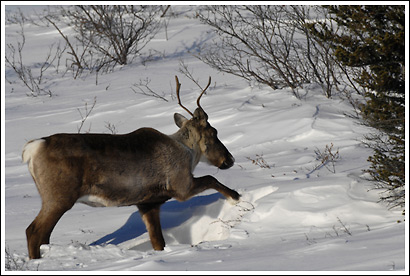 Caribou hooves are pretty unique – they’re shaped in such a way as to allow each hoof to make 4 contact points with the ground, rather than 2, as with most ungulates (hoofed mammals); this extra set of contact points allows them much better grip on icy surfaces.

It’s not unusual to see caribou run out onto ice covered lakes and riverbeds when wolves come out to hunt, because the caribou usually have the advantage over such terrain. They can run on ice without slipping much better than most creatures. There is so much snow this year in the caribou range in Wrangell-St. Elias National Park that this won’t really be an issue for another few weeks.

But once the snow melts and blows away, the caribou will come down off the ridges and hit the lakes, staying on the ice (the lakes surface remain frozen, usually, long after the snow is gone), but keeping a wary eye out for the wolves. Good luck to them.