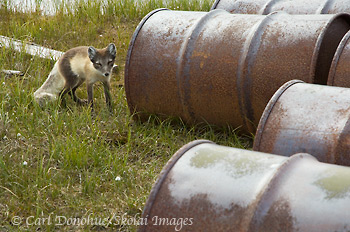 Arctic fox and oil barrels on the coastal plain, Arctic National Wildlife Refuge, Alaska. Please click on the image to view a larger version of the photo.

Excuse my rant; but, this is my blog, and I’m about to wander in the mtns for a while. Before I go, I need to speak out.

I read earlier today of ex-Alaska Governor Sarah Palin’s latest comments about the current disaster in the Gulf of Mexico. She states “Radical environmentalists: you are damaging the planet with your efforts to lock up safer drilling areas”.

Her basic premise is that the Deepwater Horizon catastrophe is the work and responsibility of “extreme environmentalists”. Let’s disregard, for now, the fact that she’s been a proponent of offshore drilling for years now (including her 2008 run for VP where she repeatedly claimed that Drill Baby, Drill “also means safely tapping into our offshore sources, safely, environmentally safe”. In her own words, whilst debating then-Senator Joe Biden she stammered “You even called drilling — safe, environmentally-friendly drilling offshore — as raping the outer continental shelf. There — with new technology, with tiny footprints even on land, it is safe to drill and we need to do more of that“.

“friendly”? If it weren’t so sad it would be farcical; what the hell is “friendly” about extracting crude oil from beneath the ocean? Makes me wonder what kind of “friends” some of these people keep.  If one of my friends came over to the house and started drilling a hole 20 000′ into the lawn I’d say they’re outta their mind.

I’ve no problem with a discussion of the collective responsibility owned by our society. I hopefully made that clear in my earlier post here. But I won’t absolve the oil industry of their responsibility, nor the clowns who would reduce a discussion of the energy policy of the world’s largest energy consumer to a 3-word bumper-sticker slogan: “Drill Here, Drill Now”  of theirs, which is the intent of Palin’s outburst. Sarah Palin’s remarks, along with this childish assessment from Ted Nugent is not an honest critique of any social construct at all. In fact, it’s nothing more than the opposite of that; an attempt to divert attention from the direct and very palpable targets of hella-oil, political corruption and bumper-sticker political campaigns to a somewhat more nebulous, transparent target. That is intolerable. END_OF_DOCUMENT_TOKEN_TO_BE_REPLACED