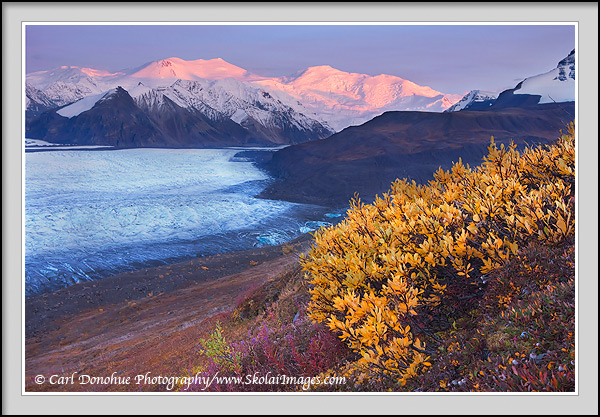 Here’s an image that I am amazingly lucky to have made. Probably luckier than I deserve to be. Not because of the luck involved in catching this scene like this; this image has been a long, long time in coming. The scene is taken from the south end of Chitistone Pass, near Skolai Pass, Wrangell-St. Elias National Park, Alaska. I’ve spent more time here than I probably should admit to, waiting, hoping and wondering if I’d ever actually happen to catch it in the light that I knew graces these peaks from time to time. Finally, this September, I was up there with our phototour and we were really blessed with some great weather. I was giddy with excitement and I’m sure the folks along on the trip were wondering just what they’d got themselves into. Within 20 minutes of landing we’d already found and photographed a Least Weasel, which I’d never had the opportunity to photograph inside the park previously. Next up we ran into some Woodland caribou, apparently the only woodland caribou herd in Alaska, so that was pretty awesome. Then we saw some Dall sheep rams, and managed to stalk up on them a little. Next up was sunset, END_OF_DOCUMENT_TOKEN_TO_BE_REPLACED