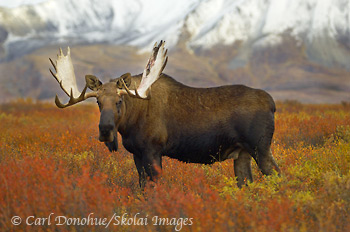 A bull moose standing on the fall tundra in Denali National Park and Preserve, Alaska. Vegetation includes Dwarf Birch and Alaska Willow. Please click on the image to view a larger version of the photo.

Recently I saw a tweet the other day from photographer Richard Bernabe: “Just had a photo editor demand raw files to process as they see fit. I turned the deal down.”

I saw and enjoyed at least some of the following conversation. We discussed the merit of sending out a RAW file to a photo editor instead of some other file format, such as a tiff or a jpeg.

For myself, I can’t see any reason to not send a RAW file if an editor or graphic artist requests it, unless there was some very highly unusual and extenuating circumstance; the only one that springs to mind is if the final image was a manual blend of multiple exposures, and/or a panoramic stitch that I’d put together. Even in those circumstances, I suspect I’d most likely explain to the person I was dealing with about the amount of time involved in finishing the product from camera to computer screen, and suggest they simply use the finished 8-bit tif or jpeg file, but if they felt they really wanted the RAW files, I can’t see why not; it’d mean they have to do (in some cases) a whole lot of work I’d already done, but if that’s what they wanted, I can’t see a good reason to refuse.

If someone paid me to mow their lawn, then said they were going to mow it again, I’d have no issue with that. And while it’s true something like mowing a lawn isn’t a valid comparison to the artful process, the exact same kind of thing happens in art all the time.

Some of the world’s greatest musicians get called in (and highly paid) to record a track for an album. Let’s say a drummer named Steve Gap is hired to play drums for a studio album. Steve comes in, plays the track and then finds out the producer is going to hire another drummer to redo the hihat track? Happens all the time. Or the producer is going to use Pro Tools (a musician’s version of photoshop) and completely alter the snare track. Or the kick drum? Happens all the time.

Let’s say a photo editor calls and wants the moose photo above (happened the same week I saw the above tweet). I’m not going to have an issue if they choose to crop both sides in to the moose’s body, though that would drastically alter the mood of the image. That also happens all the time. or they crop it to a vertical composition. Or they pump up the saturation somewhat? Happens all the time. In fact, if the editor is going to do all this work, I’d probably see MORE sense in giving them the RAW file, as that contains more data to work with, more information for them to adjust and tweak the image for their usage than a tif or jpeg would.

Similarly, the argument of “giving up creative control” is somewhat dishonest. An editor is free to make all kinds of adjustments to any image you send them, and I doubt many photographers in today’s photo stock market are going to demand the printed image be cleared with them before final publication. In other words, whatever creative control you might be giving up with RAW files can be similarly lost with any other format; with the potential of the final image only rendering even worse, because we gave them a limited data set to work with.

A lot of folks call the RAW file the digital negative; and it was perfectly common in the days before digital capture to send out slides, be they originals or copies, for photo editors. That’s HOW we sold our photos. So I simply don’t see how it’s any different now – unless, of course, folks are so intensely photoshopping and adjusting their RAW images that they don’t want editors (or anyone else) to see the original RAW file (and I’m not suggesting this is the case with Rich, above, at all, and don’t mean to imply otherwise).

If it were me as photo editor, I’d need to have some particular reason to request a RAW file, simply because I’d rather let the photographer do the work of the conversion process. But, if for some reason it worked better for me to get a RAW file, I’d do it. I just can’t see a single reason for a photographer to refuse to send out a RAW file for a stock photo sale. If the editor wishes to deal with a RAW file rather than a tif, or jpeg, more power to them, I say.