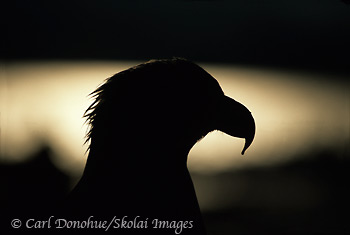 An adult Bald Eagle silhouetted headshot, on perch, Homer, Alaska. (Haliaeetus leucocephalus). This photo was taken with photo equipment, by a photographer. The 2 worked together. The eagle co-operated only briefly. Pesky eagles. Click on the image above to view a larger version of this photo.

I read it again last night. This nonsense has to stop. Why do photographers so often have such a hard time simply acknowledging that what we do is inherently technological? As such, technological advances (i.e., new gear) can (and typically do) play an enormous role in the work we produce. Perhaps much more so than most other art forms.

You’ve all seen the kind of commentary I’m talking about; another piece about how painters don’t talk endlessly about their paintbrushes. Or, even more inanely, how if Art Wolfe were to shoot with a P&S camera, he’d still produce a remarkable portfolio. It’s the photographer, not the camera, that produces great work, blah, blah, blay. 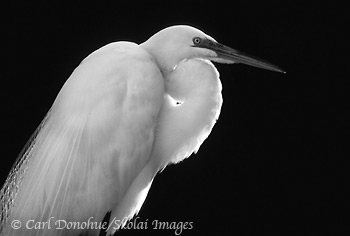 “The word photography is based on the Greek φῶς(photos) “light” and γραφή (graphé) “representation by means of lines” or “drawing”, together meaning “drawing with light” (ya gotta love Wikipedia).

It’s time photographers (and photography) mature, and walk away from this virtually meaningless phrase. The phrase is a fabrication, deception at best, and  has never been valid. Let it rot. We’re not painters, we’re photographers. We no more “draw with light” than does any person with their finger in the sand. Pixels and film aren’t light, they don’t even “capture” light, they merely represent it – to propose otherwise suggests only a childlike understanding of what light might actually be.

END_OF_DOCUMENT_TOKEN_TO_BE_REPLACED 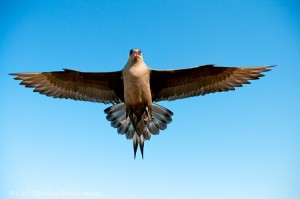 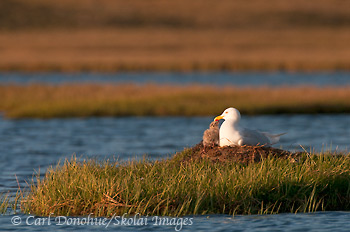 A glaucous gull sits with its chick on a nest on the coastal plain in the Arctic National Wildlife Refuge, ANWR, Alaska, ( Larus hyperboreus). Please click on the thumbnail to view a larger version of the photo.

I posted this ahead of time; right now I’m out on a hike, but thought I’d post this image from my recent trip to the Arctic National Wildlife Refuge. Taken on the final evening of our trip, this Glaucous gull (Larus hyperboreus) and chick were a beautiful sight in gorgeous light.

The gulls are pretty common in the refuge in summertime, and can be pretty aggressive in defense of their young. This gull and its mate were busy most of the evening dive bombing a Red-throated loon that was nesting nearby; apparently too close nearby for the gulls’ peace of mind.

Hope you enjoy the photo. I’ll be back from the current trip soon enough, and wil try to post a few more images and some video from the trips. Until then, 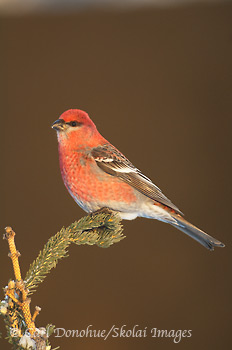 A male Pine Grosbeak (Pinicola enucleator), perched on a small spruce tree in Wrangell-St. Elias National Park and Preserve, Alaska. Please click the image to view a larger version of the photo.

Here’s a photo I took last spring of a male Pine Grosbeak. I had set up a couple of feeders around the Shack and these gorgeous birds would come in every day and have a good ole time. Other regular visitors to the buffet were Black-capped and Boreal Chickadees, Common Redpolls, Hairy and Downy Woodpeckers, Gray Jays and, of course, the effervescent Red Squirrel. Ravens came by, from time to time, but rarely dropped down to the feeder.  The Pine Grosbeaks were my favorite though.

The grosbeaks are actually a finch, the largest of the boreal finches. A group of these birds together is called, wait for it, a ‘gross’ of grosbeaks. They’re such a cool bird, and very tolerant of my puttering around the cabin; they’d generally ignore my comings and goings.

I grabbed a small white spruce sapling that some snow-machiners had run over and destroyed, and used it to set up the perch. For a background I hung a fleece blanket up and positioned it for a nice clean background. It’s a little bit ‘contrived’, but hopefully it works OK. END_OF_DOCUMENT_TOKEN_TO_BE_REPLACED 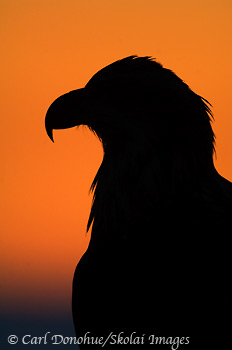 A bald eagle headshot, silhouetted against a glowing sunset, Kachemak Bay, Homer, Alaska. Click the image to view a larger version of the photo.

I read a great blog on art yesterday, by Paul Grecian. The subject was a play on the aural equivalent of the old adage, ‘if a tree falls in a forest and no one hears it does it make a sound’. Paul takes the viewpoint that art is a human pursuit, and exists only when it has a human audience. “If there is no human to perceive it and translate the experience into an emotion, then there is no art” – I’m not so sure I subscribe to that idea, for a number of reasons.

I think art is a verb; art is something we do. The results of that process might be nice to look at, or not, or nice to listen to, but the essence of art is creating. The act of creating is where art lies, not the products of that process. And we are not at all the sole creators. An American Tree Sparrow calling the tune of the alpine country is as artful as Joshua Bell playing a Beethoven concerto. The dance of the Japanese Red Crowned Crane is glorious. A Bower bird’s building her nest? The song of the wolf pack over the frozen night air is as spell-binding as Aretha or Stevie on a good day, no? What distinguishes human art from the performances of our fellow creatures, other than our own ability (and endeavours) to relate to it? 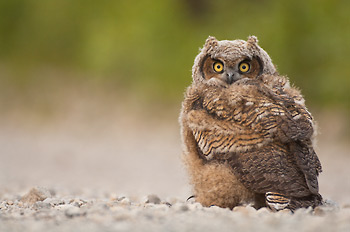 Great Horned Owl chick (owlet – Bubo virginianus), in Wrangell-St. Elias National Park and Preserve, Alaska. The chicks were just flegding, and learning to fly. This little guy had landed on the grounded, and before long flew off to a nearby white spruce tree in the boreal forest. Great Horned Owl, Wrangell-St. Elias National Park and Preserve, Alaska. Please click on the image to view a larger version of the photo.

Just a quick photo for the weekend. A Great Horned Owl (Bubo virginianus) chick in Wrangell-St. Elias National Park and Preserve, Alaska. The young owls were just fledging, learning to fly, and this little guy wasn’t quite sure what to make of the weird guy with the camera, laying prone on the ground nearby.

Have a great weekend all. 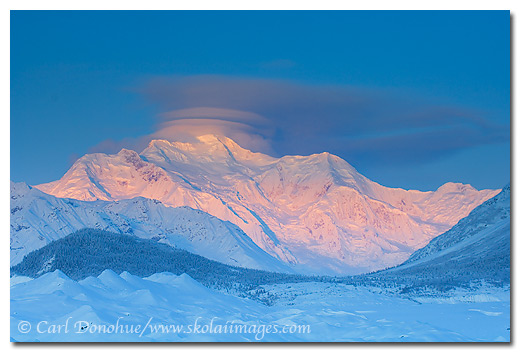 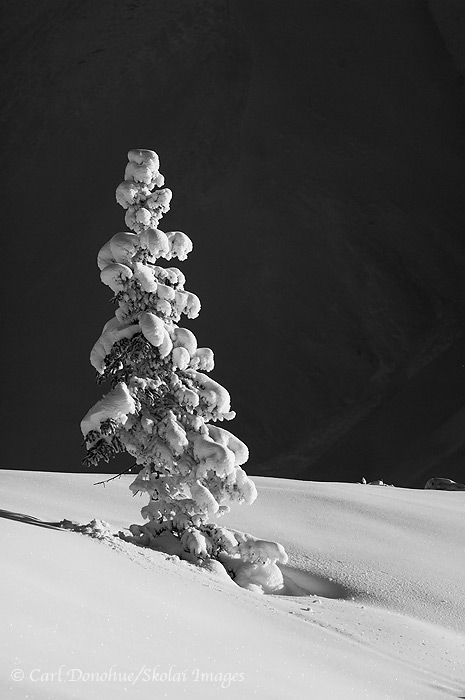 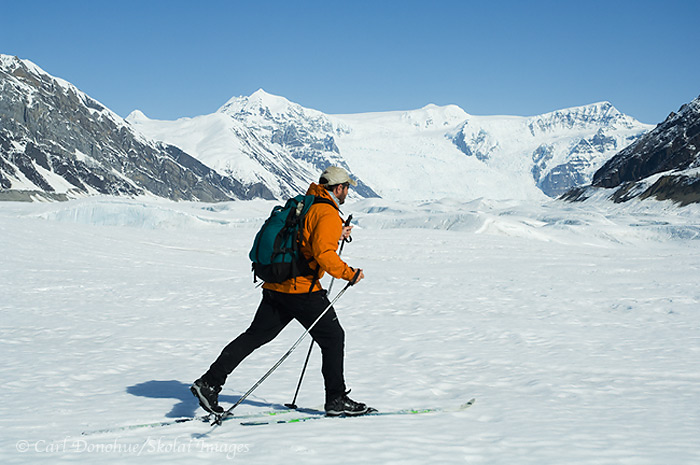 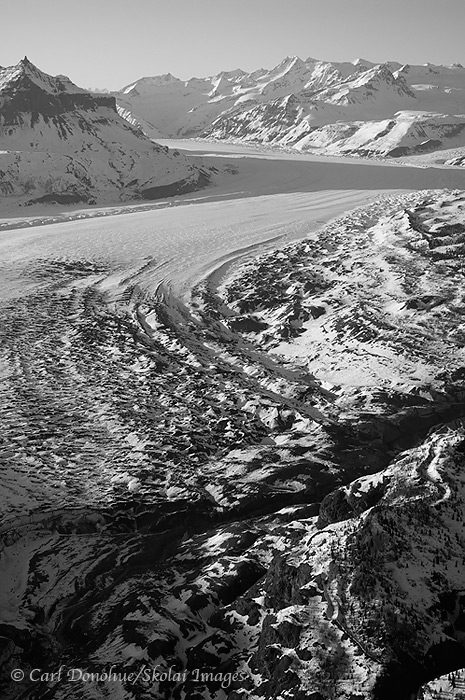 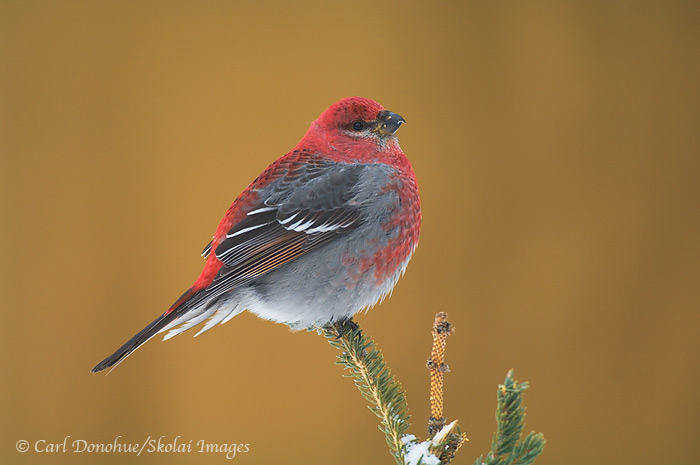 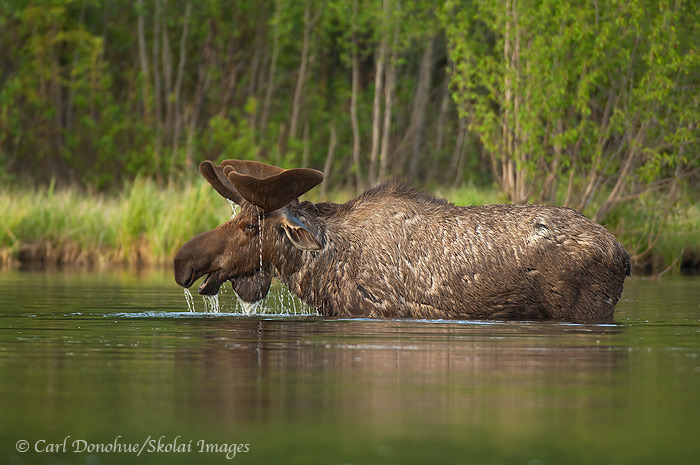 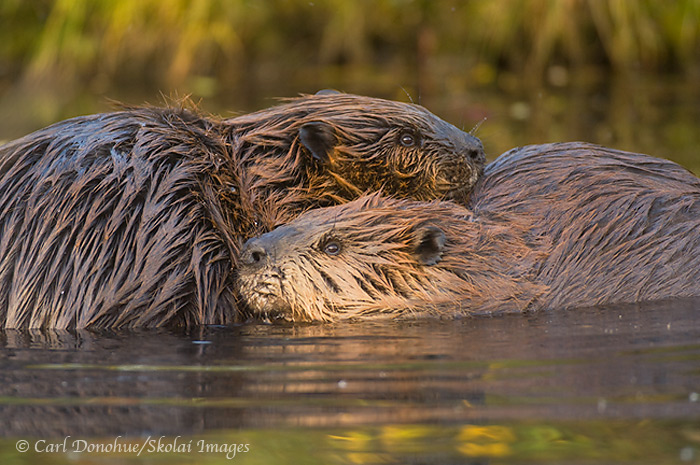 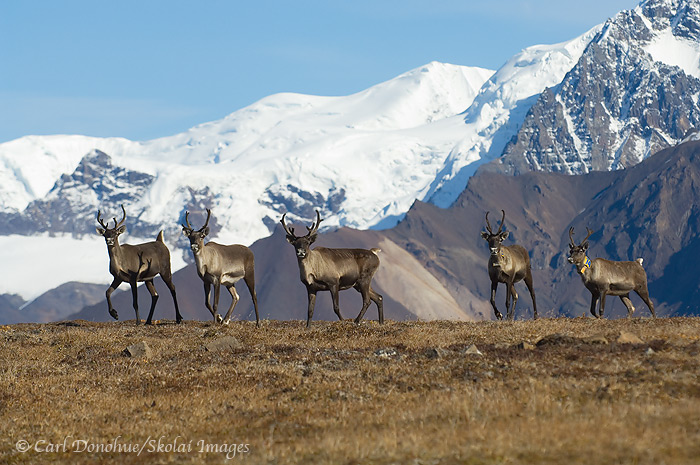 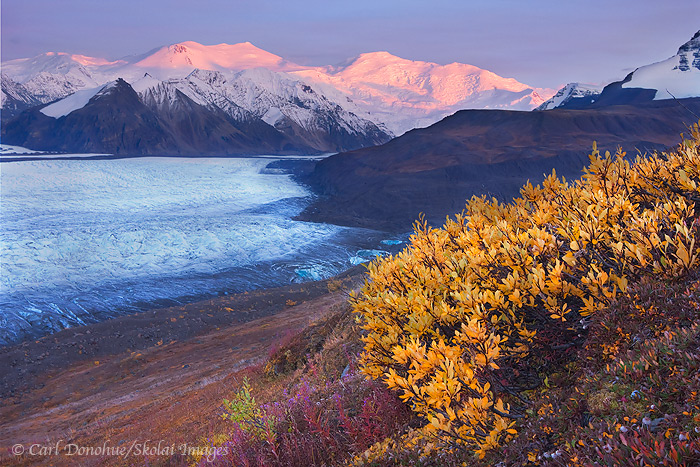 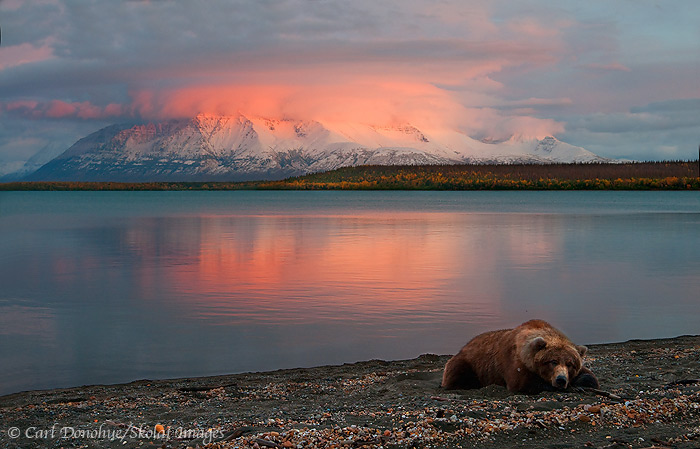 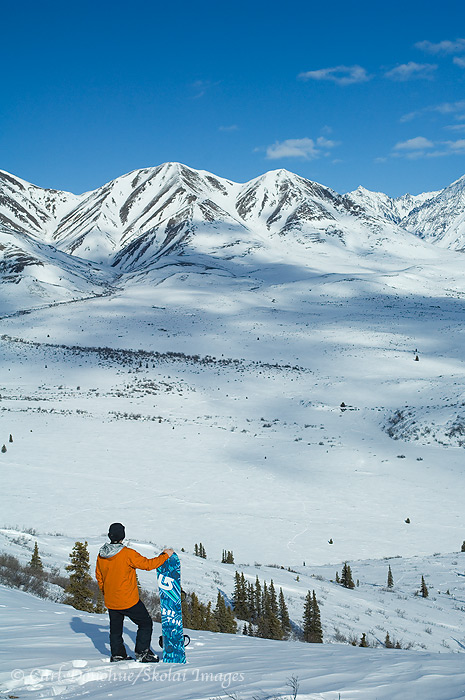 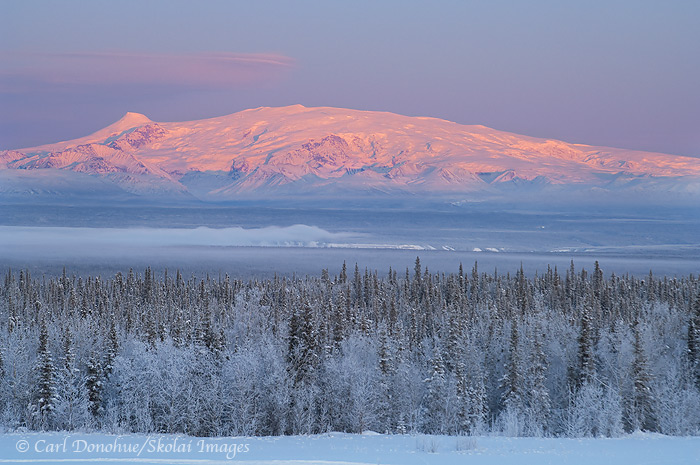 Dawn rising over Mount Blackburn, elevation – 16,390 feet (4,996 M), winter, Wrangell-St. Elias National Park, Alaska. Click the image to see a larger version and to browse the rest of the gallery.

I thought I might make a blog post, the first for the new year, with a quick presentation of my favorite images from the past year. Not necessarily a “best of”, but just a collection of 12 images, one from each month, each of which mean something to me. Some of these have appeared on the blog before, some have not.

The first one is my favorite image of Mt. Blackburn I’ve taken so far, taken one cold morning a year ago. One of the primary reasons I wanted to spend winter in the McCarthy area was this particular scene. I knew the mountain would get great light in the winter, though I’d only viewed it from here in the summer previously. During the summer the great light is on the northside of mountains here in Alaska, so I’d never really viewed this scene in the great alpenglow you see here. A couple of winters in a cabin in the woods rewarded me in many ways, and I consider this image a nice memory of those days. Good times. 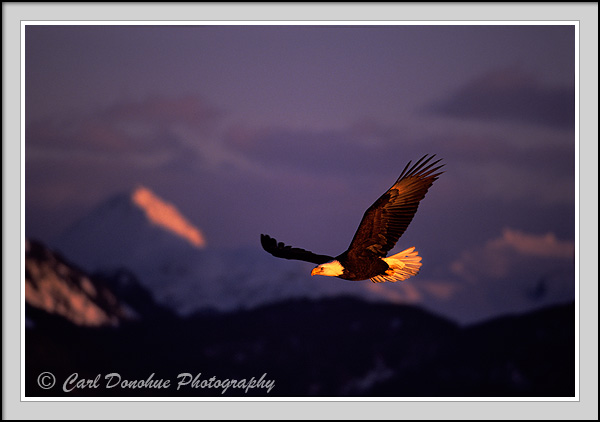 Few creatures express the wild quite like a soaring bald eagle does.

This photo is presented as a memorial to the late Jean Keene, good friend and a dear lady, from Homer, Alaska. Jean’s love for the eagles gave bird lovers, wildlife lovers and photographers from all around the world a lifetime of amazing opportunity, but more than that she showed by example how to care about the creatures with whom we share the earth.

Thank you Jean – may you Rest in Peace. 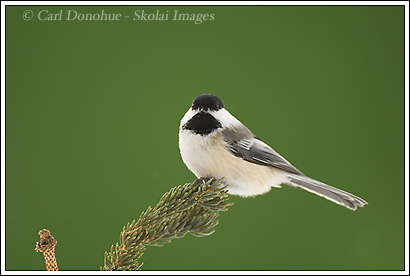 Here’s a Black-capped Chickadee (Poecile atricapillus), year-round Alaska resident, perched on a small spruce tree. There’s not a lot of birds in the great north woods this time of year, so it’s always a treat when they stop by. I’ll try to get a photo of his close cousin, the Boreal Chickadee – so far, no luck.