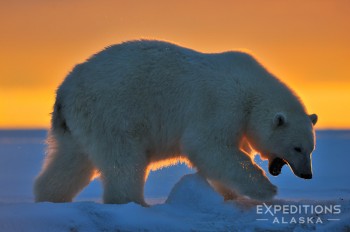 A young polar bear on the prowl, silhouetted against a colorful sunrise, on the frozen ground of the Arctic National Wildlife Refuge (ANWR), Alaska. Polar bear, Ursus maritimus, Alaska. Please click on the image above to view a larger version of this photo.

We set out this morning with high hopes, clear skies and the beginning of color on the horizon. Everyone hoped for a nice sky and some polar bear activity. Hoping, and getting are two different things.

So how does it play out? The sunrise turned out to be, in a word, spectacular. The morning itself, frustrating.

We found some polar bears relatively soon, but they weren’t really in a great location. On top of that, they were asleep. certainly, polar bears are so photogenic that even asleep, they make a great subject. But they were sleeping just below a short embankment, with the colorful sky above and beyond and so we couldn’t find a way to really make it work. One option might have been to shoot multiple exposures, steadily, and then blend the 2 together to properly capture detail in the foreground and the background. I shot a couple of images like this, but even as I was photographing, I knew it wasn’t really happening. OK stuff, but nothing grand.

So, we waited. And waited. A couple of the polar bears (there were 2 groups of 3 hanging around) would occasionally get up and wander around, and we’d position ourselves as carefully as we could to be in the best spot to frame them against the colorful sky. Polar bears aren’t always the most co-operative or predictable animal, so we mostly swung and missed.

With wildlife photography, persistence is key. Persistence and perception. Watching the sky, the animals, etc, and trying to figure where you need to be before the moment happens is what it’s all about. And that’s probably the thing most beginning and even intermediate photographers don’t do well.  They sit and watch and then wish they’d been 25 yards to the right when the moment happens. Learn to anticipate things.

As this polar bear started becoming a little more active, I instructed our boat operator to keep moving the boat, to keep, best we could, the colorful sky behind him. It’s a gamble, and sometimes (a lot of the time) we lose.  But ya have to play to win. And finally, things paid off for us, as the bear stepped right where I wanted him to, and yawned.

All told, I got maybe 2-3 images from this morning that I like, and one that I really like. Not a successful shoot, by some measures. But I’d really rather do my best, and try to make something happen, and come home empty handed, than sit in place and watch and come home with a bunch of more mediocre images (I’m in the process of culling images from an old HD this week – 45GB gone and I’ve only barely started).

So, for me, this was a great morning. Soon after this, the sun rose high enough to hide itself behind a thin cloud, and the bears wandered further around the edge of the snow and ice where we couldn’t get close to them. The morning’s photography was effectively over.