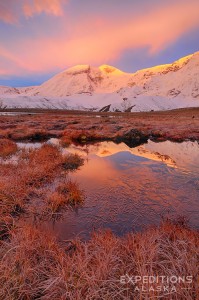 Mt Jarvis at sunrise, Wrangell-St. Elias National Park, Alaska. Please click on the image above to view a larger version of this photo.

Catching up on some photo editing and processing and deleting and keywording and updating and blah blah blah. Just as boring as that stuff is looking at new (for me) software programs to assist with that stuff. One I ran across, that I’d heard about for a while now is Nik HDR Efex Pro 2; I gave it a whirl the other day, and so far, I like it. A very streamlined hdr process is exactly what I’ve been looking for. Something easy and intuitive, to ease the pain of processing hdr images.

For those of you unfamiliar with the term, hdr is an acronym for High Dynamic Range; most of the time, we simply mean we take multiple exposures of the same frame, and then blend those exposures together to best present the wide range of contrast in the scene.

So this image is a blend of 7 different exposures, taken one stop apart. I converted the original nikon RAW files to tif files, via Nikon Capture NX2. Efex Pro 2 quickly processed the images and then offers a variety of presets for different modes of compression and toning, etc. I found the program pretty easy and intuitive, which was something that is rapidly becoming a real priority when I look at new software programs.

While most of the presets were pretty garish and unappealing, with each image I played with, there was at least one or 2 that were simple enough that they didn’t look like something produced for a children’s TV show. Even one of the black and white conversion’s for this image was reasonably elegant.

I haven’t really spent too much time with the program yet, but I’m pretty happy with it so far. For this image, I think I just took the 2nd preset (I forget what they call it), tweaked a few of the settings, and saved the hdr tiff file. Each preset is fully ‘tweakable’; each control is adjustable with simple sliders, and readily apparent results. Once Nik ran the conversion, I opened the 16-bit tif in Photoshop, dialed in a slight (masked) curves adjustment to add the slightest contrast to a few areas, slightly desaturated the image, and that was it.

Oh, this image was taken on a backpacking trip 2 years ago, over in Wrangell-St. Elias National Park; I’ve still got quite a few “old” files like this I haven’t dealt with, because prior to Nik, I wasn’t happy with the time consuming process of doing hdr processing. Now it’s relatively painless, so I’ll try to catch up on a few more of these photos. But first, I’ve got other places to be.